Enhance your practice with an Authentic Deity Thangka.  These inspirational pieces of art are direct-to-fabric Gicleé prints mounted in the traditional scroll style on brocade fabric. Each illustration reflects the artist’s exact knowledge of the traditional iconography, proportions and measurements used for each deity.

Tibetan monks and lamas used thangkas as an aid to illustrate Buddhist Dharma teachings. Each detail has meaning and refers to aspects of the deity’s activity or Buddhist philosophy. They have even been referred to as a ‘roadmap to enlightenment’. Thangkas also support visualization of the deity during meditation practice. 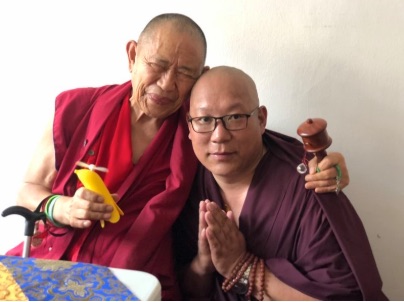 Thangka Artist Wangchen Lama was born in 1972 – auspiciously in H.E. Garchen Rinpoche’s hometown of Nanchen, Dongur, Tibet. From an early age he loved the arts and painting, but it was not until he went to Gar Monastery in 1987 that he would find an opportunity to study and practice thangka painting.

In 1995, after years of concentrating on his monastic studies, he met the thangka painting teacher, Sonam Nyima. Then in 1997, he was invited to join the best thangka painters in Tibet to create the largest thangka painting in the world. It captures the vast history of Tibetan Buddhism. Wangchen Lama was asked to paint famous teachers in the Drikung Kagyu lineage, including Lord Jigten Sumgon.

In recognition for his work, he received certificates in honor of his skill as an artist and participation in this project. Currently the 2,000-foot-long painting is installed at the Tibetan Medicine & Culture Museum. Since 2008, Wangchen Lama has developed his computer skills to create thankgas.

His work reflects his training in traditional stylistic requirements found in authentic Tibetan thangka paintings, as well as his unique talent. 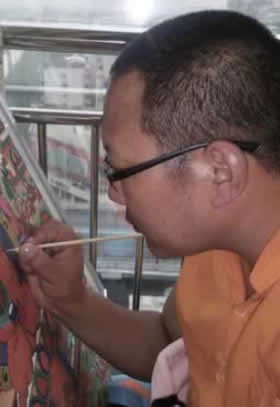 If you have trouble with the Order Form, Click Here

Scroll in the window below to complete your order.