Chenrezig, the Buddha of Compassion, is widely regarded as the most popular deity in Tibetan Buddhism. There is no time of the day in which the blessings of the mantra, Om Mani Padme Hung, are not being offered to alleviate the suffering of beings—whether by mantra recitation or the turning of prayer wheels. Our beloved teacher, H.E. Garchen Rinpoche, is rarely seen without his precious prayer wheel.

Chenrezig (Skt: Avalokitesvara) was born from a shaft of light emanating from the heart of Buddha Amitabha which transformed into a lotus. He arose as the radiant, white-faced, four-armed Chenrezig depicted here. His front two hands are pressed together at the heart, holding a wish-fulfilling jewel which reflects his desire to bring all sentient beings to enlightenment. In his right hand is a crystal rosary symbolizing liberation from samsara and in his left, the blue utpala flower expresses his all-encompassing, compassionate motivation throughout the three times. 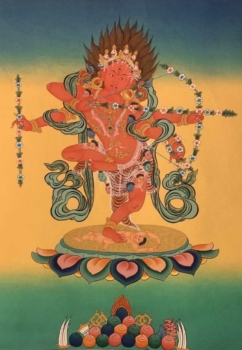