Lord Jigten Sumgon, the founder of the Drikung Kagyu school of Buddhism, was born in 1143 C.E. in Eastern Tibet. His appearance was predicted in many sutras, tantras and termas—and he is sometimes called the second Nagarjuna.

Jigten Sumgon studied with his root teacher, Phagmo Drupa. At the time of Phagmo Drupa’s parinirvana, a five-pronged vajra emanated from his heart-center and dissolved into the heart center of Jigten Sumgon, indicating he was his guru’s successor. Later, during his meditation in Euchung Cave, Lord Jigten Sumgon overcame a final obstacle to his enlightenment, leprosy, through the power of his compassion for the suffering of others.  Shortly after, he had a vision of the Seven Taras whose prayer is widely recited today.

Lord Jigten Sumgon established Drikung Thel that attracted over 100,000 monks. His disciple, Gar Chodingpa presented him with a relic of the Buddha’s tooth, declaring he was returning it to its owner. After his parinirvana, he was cremated, but his heart was not touched by fire and turned golden in color, indicating he was an incarnation of the Buddha. It is said that those disciples who die with great devotion to him will be born in his Eastern Great All-Pervading Buddhafield. 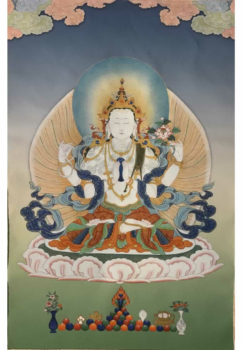 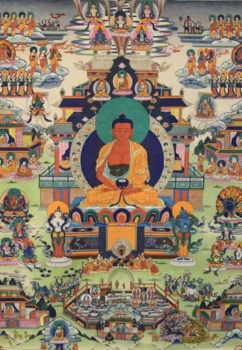