The transformation of Chenrezig (Skt: Avalokitesvara) into his 1000-Armed form reflects the vastness and sincerity of his intention to end the suffering of all sentient beings.

It is said that Chenrezig vowed before Buddha Amitabha that if he should ever have the slightest thought of giving up, his head should crack into ten pieces and his body should split into a thousand pieces. Though he worked tirelessly, Chenrezig saw that only a small number of beings were liberated. In despair, he wanted to give up—and at that moment, his body shattered according to his vow.

Chenrezig called upon his guru, Amitabha, who restored his broken body by transforming it into 1,000 arms with an all-seeing eye at each palm which increased his capacity to help sentient beings 1,000 times. His broken head became nine peaceful faces and one wrathful with Buddha Amitabha at the top.

Many deep meditative practices incorporate this aspect of Chenrezig, particularly the purification practice of Nyung-nay. 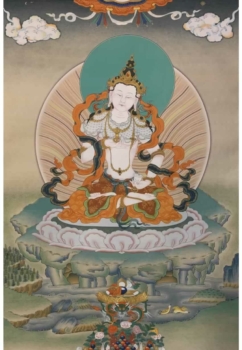 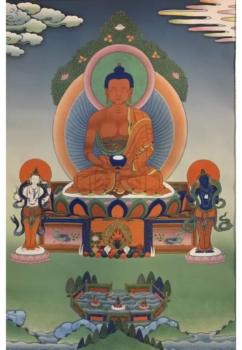