Vajrapani, the Lord of Powerful Means, represents the power aspect of all the Buddhas. The vajra (Tib: dorje) he holds in his right hand represents compassion’s power.

Frequently depicted in his fierce form, Vajrapani is considered a powerful protector and remover of obstacles for practitioners. Blue in color, he is part of the family of Akshobya, the Dhyani Buddha that transforms anger to mirrorlike clarity.

In addition, Vajrapani is considered part of a triad of bodhisattvas that protected Shakyamuni Buddha. The others are Avalokiteshvara (Tib; Chenrezig), who represents the Buddhas’ compassion and Manjushri, who represents their wisdom. Those who practice Amitabha also visualize Vajrapani standing at the base of his throne with Avalokiteshvara. It is said that Vajrapani will become the last Buddha to appear in this world cycle. 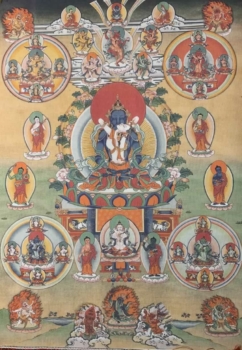 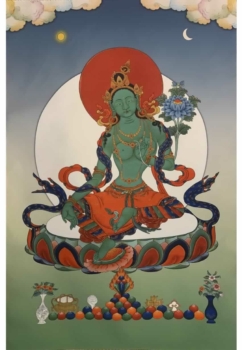