His Holiness Drikung Kyabgon Chungtsang, the 36th throne holder of the Drikung Kagyu Lineage and the 8th reincarnation of the Chungtsang Rinpoche is a manifestation of Manjushri. 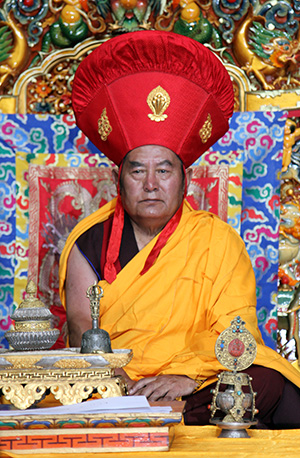 Drikung Kyabgon Chungtsang, Tenzin Chokyi Nangwa, was born in the Water-Horse-Year 1942 in Lhokha as the youngest of five sons into the prominent aristocratic Lhagyari family. His father was Trichen Kelsang Nyendrak and his mother Rigzin Chodzom. The Lhagyari family is one of the oldest noble houses of Tibet descending from the ancient royal dynasty. The family branch is called Dewa Lhagyari Trichen.

After the untimely passing of the 7th Chungtsang Rinpoche, Tenzin Chkyi Jungne (1909-1940), the youngest son of the Lhagyari family was recognized as the reincarnation of the Chungtsang Rinpoche in 1946 and was enthroned in Drikung Thil Monastery. There were many signs, divinations and consultations of oracles that confirmed his reincarnation. Gyabra Tritsab had a vision at Lake Lhamo Latso which was substantiated by further divinations by H.H. the 16th Karmapa and by H.H. Taklung Matrul. The Tibetan Government authenticated the reincarnation as well, and Chungtsang passed the traditional test of selecting religious items belonging to former reincarnations.

At the age of eight years he started to learn to read and write, memorize texts, and to perform rites and rituals. His main spiritual instructor (yongzin) was first Gar Khensur Tsangyang Norbu Rinpoche, from 1955 onwards Tritsab Gyabra Rinpoche and Ayang Thubten Rinpoche. He received transmissions, empowerments, and teachings of the Kagyu tradition and the Drikung Kagyu tradition in particular by Tritsab Gyabra, Ayang Thubten, Lho Bongtrul Rinpoche, and other eminent Lamas.

In 1959 after the Tibetan Uprising, the Drikung Kyabgon Chungtsang had to undergo Communist indoctrinations and severe struggle sessions at Nyima Changra Shedra, where the Chinese Army had established their regional headquarters. He was badly mistreated and in December 1959 he was put in jail. The Drikung Kyabgon Chungtsang remained imprisoned for 23 years until 1982. Especially during the times of the Cultural Revolution he had to undergo harsh re-education programs and to perform forced labor. At that time he was transferred to the infamous prison camp at Kongpo Ningtri. There he had to cut down trees in the woods. One day he was hit by a falling tree and badly injured. It was said that he only survived because he was the Drikung Kyabgon Chungtsang.

Eventually he was released from prison in the course of the political liberalization of 1983 in China and was given a post in the Regional Peoples Congress and subsequently a leading position in the Department of Religious Affairs of the Tibet Autonomous Region.