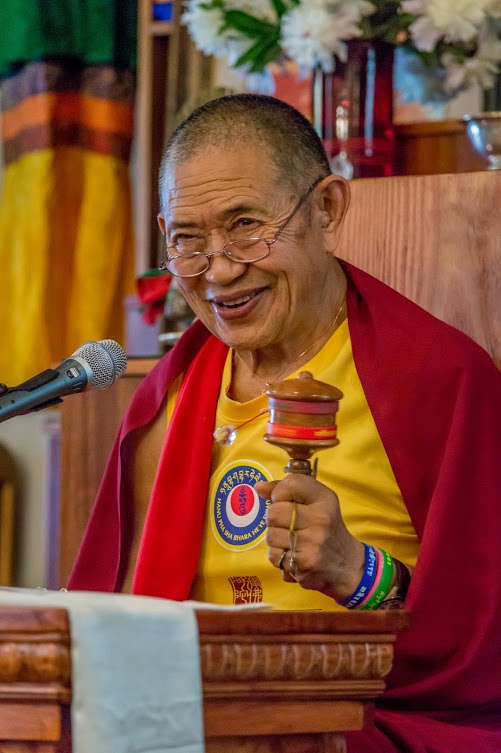 Garchen Rinpoche is a Drikung Kagyu lama who is widely recognized to have attained profound insight and realization.

Rinpoche was born in 1936 in Nangchen, Kham in eastern Tibet. The King of Nangchen personally took responsibility for searching for the reincarnation of the 7th Gar Tinley Yonkyab. Rinpoche was recognized and enthroned by His Holiness the late Drikung Kyabgon Shiwei Lodoe. At the age of seven Rinpoche was brought to Lho Miyalgon, where he was offered ceremonial clothes and other items. He pointed to a painting of the Drikung lineage’s founder, Jigten Sumgon, and proved his authenticity as the reincarnation by saying, “He is my Guru.” This m ade people around him confident that he was the true reincarnation. From that time until the age of 22 Rinpoche lived at and administered this monastery.

During this period, he was taught by his former disciple, Chime Dorje, who gave him many empowerments, transmissions and teachings. When Garchen Rinpoche was 13, Chime Dorje started giving him the Mahamudra teachings. Then in the Lho Lungkar Gon monastery, Tulku Thubten Nyingba Rinpoche gave him all the Drikung Kagyu empowerments and teachings. After that, he started the Ngondro practice, and studied the Six Yogas of Naropa.

At the age of 22, after completing a two and a half year retreat, he was imprisoned for 20 years during the political turmoil of China’s Cultural Revolution. While in the labor camp, he received meditation instruction from his root lama, the Nyingma master Khenpo Munsel. Exhibiting enormous perseverance, Garchen Rinpoche secretly practiced teachings for twenty years. Khenpo Munsel was very pleased and reportedly said, “He is a very special bodhisattva incarnation. Of this there is no doubt.” While still in prison Garchen Rinpoche attained realization of the lama’s wisdom mind.

Since his release from prison in 1979, Garchen Rinpoche has made great effort to rebuild the Drikung Kagyu monasteries and to reestablish the Buddhist teachings in eastern Tibet. At present, Garchen Rinpoche is involved in restoring Gar Monastery and establishing a monastic college there, as well as two boarding schools for local Tibetan children.

Garchen Rinpoche is the founder and spiritual director of the Garchen Buddhist Institute in Chino Valley, Arizona, the Drikung Mahayana Center in North Potomac, Maryland and Gar Drolma Choling in Dayton, Ohio. Internationally he has founded centers in Germany and Malaysia. Because of his vast realization Garchen Rinpoche gathers students around him wherever he travels. Yet, he remains steadfast in humility, loving kindness and pure vision, thinking only of how to benefit others. He is an extraordinary being in this age of degeneration and strife. Truly, compassion and wisdom pour forth from this precious teacher like water from a mountain stream.